Diary of the World Record: Day65

Didn’t get good sleep or that early start. Sweated soooo much [in bed]!

Good old climb in the morning – then when I expected a plateaux it was a great descent.  Just after Rao I stopped at a shop and met a guy called John who gave me a coffee and told me the equator was at Bonjol – a place I could ride to in the same day.  That spurred me on!

I had a good lunch in Panti [how often can you say that!], where there are hot springs and many banyan trees. The big town – Lubuk Sikaping – was only a challenge to make sure I was on correct road.  Then I arrived in Bonjol: I had the GPS out to look for 0 latitude, but it wasn’t needed as there’s an arch over the road and a visitor centre.  There are also many [annoying] T-shirt sellers!  One thing there isn’t though, which I thought there would be, is hotels!  Ah!  I had to ride on to Bukittinggi up a massive hill [2500ft].  It got dark and rained, but I got there and to a nice hotel.

Got okay from GWR [Guinness World Records] to transfer to Java ASPA.  Good for my chances on the record!

Oh, and the Garmin… I watched it on the long climbs and the altitude gained [on the day’s ride] does not go up with the altitude [read instantaneously]. Sometimes it’s 90%, sometimes it’s <80%.  Erratic, wrong, crap!

The Equator, the half-way line point between the North Pole and the South Pole, was a big part of why I had come to Sumatra.  I felt cycling over the conceptual boundary between Northern and Sothern hemisphere’s of the Earth was something an around-the-world cyclist ought to do, even if the rules didn’t require it and it was hard. 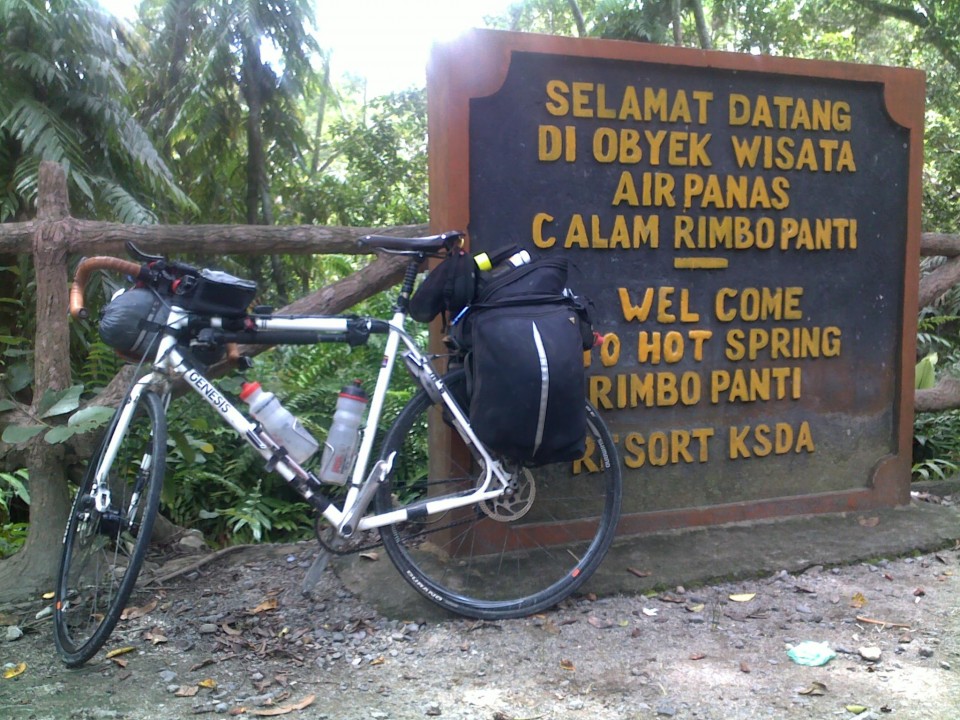 Garmin troubles were very frustrating.  If it had been a reliable piece of equipment; if it were accurate, or even just repeatable/reliable in it’s wrongness, I’d have loved the Garmin.  To know my location, altitude, route taken so far, climbing done on the day, collect evidence for the record, and even be guided all by a one device is wonderful proposition.  My wife had spent a lot of money getting me the top-of-the-range model, so not only was I frustrated by it actually doing none of it’s jobs well enough, I was distraught about my ungratefulness. 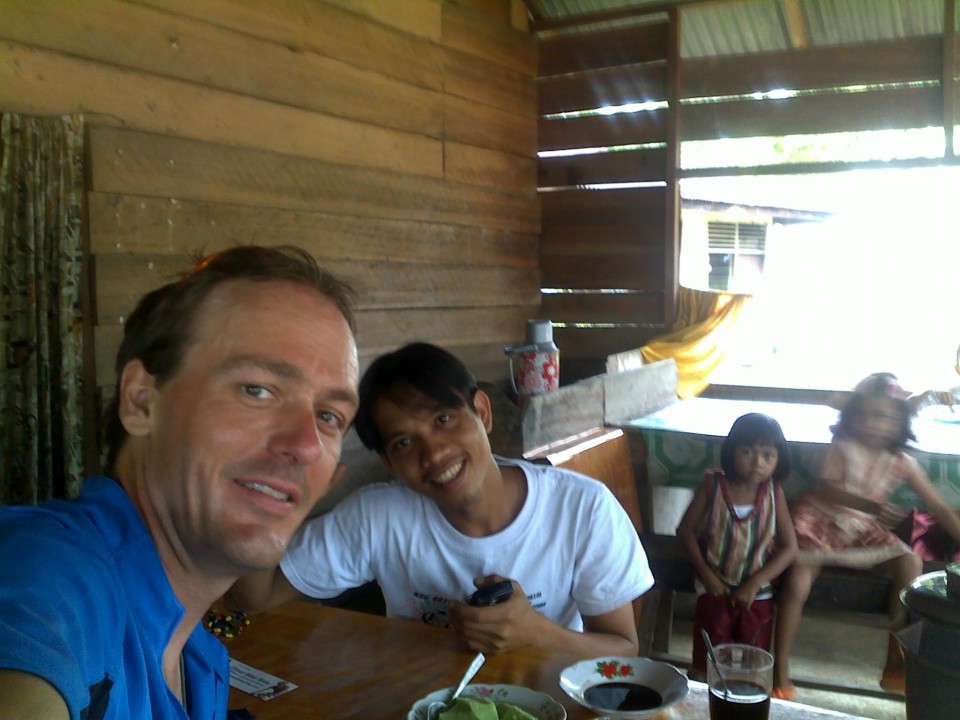 Local John explaining to Vin how close the equator was.

The chap John I mentioned had been just a random friendly fellow on the street when I stopped for snacks, but he had good language skills and boundless energy.  He invited me a few doors down the road to his house and we sat on the veranda for coffee.  It was only there that I realised quite how close I was to the equator.  I had different lines drawn on different maps, so all I knew before then was that I’d cross it eventually.

I remember being very disappointed at the lack of hotels at the equator, but actually it brought the best out of me and the day.  The extra thirty miles, mainly climbing in tropical rain-forest, reminded me what I was capable of and allowed me to see jungle monkeys in the wild (until then I’d only seen them in sad dirty cages as I past street markets).

Over dinner in the pleasant resort hotel, I plotted my new course for the morning: Just fifty miles to the airport, mostly downhill!  It would be fun, and I knew I was back in the game for the record!