Diary of the World Record: Day18

Emotional turmoil becoming more like a hurricane: Every thought of wife, home, friends, family, England…  Even every friendly or familial act here can make me cry.  Have to stop imagining getting into Plymouth on the ferry – it’s far too intense.

It’s the thought that the tiredness, illness, saddle sores, sun burn, effort, hassle, money etc might actually achieve something.  If it’s even remotely related to the scale of difficulty it will be the biggest thing I have ever dreamt of.

Many Dragonflies still! – Nice Libyan thing, ever since the border.

Hotel tried to rip us off, but a local offered hospitality while I was working on the bike – so free! Arabs are generous hosts. 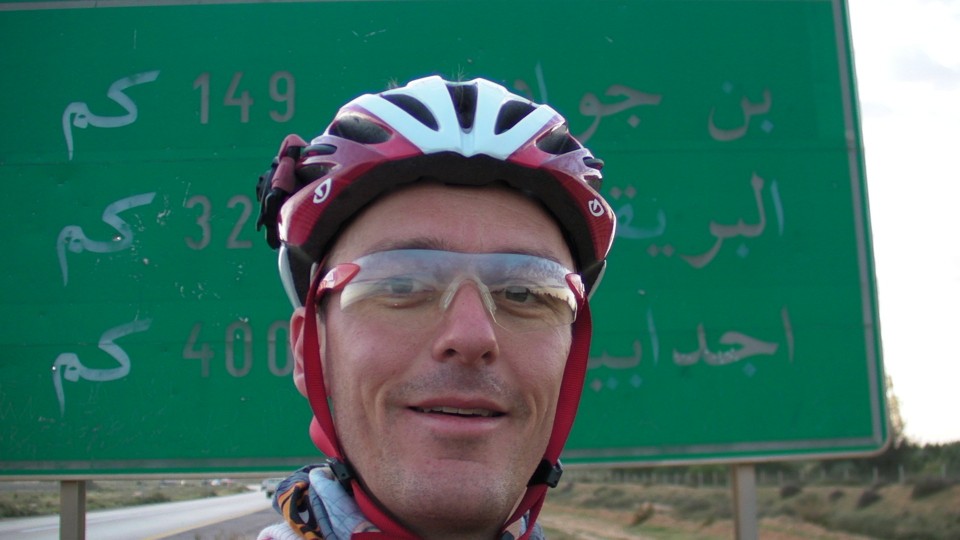 In the end, my guide didn’t let us stay with the chap who’d offered.  Instead we camped.  Walid has kept on insisting that Libyans are all happy and there is no crime, but he didn’t trust people.  Other signs of an un-trusting culture were the very strong bars, gates, fences, and security screens around most property.

Bin Jawad was basically a truck-stop town; only a dozen or so buildings, a café/hotel, and a fuel station.  That’s not the way the western media talked of it a year later during the “Battle of Bin Jawad” – they said it was a city!  It was strategically important in the war like it was important to me during the ride – a refuge in the desert – but it reveals how much we should rely on what we’re told.  After the revolution, a mass grave containing 160 rebel fighter bodies proved this had been a serious part of front line.

The only negative for me in the town was being approached by some men and being asked to not wear shorts.  They said it was fine for cycling, but now I was stopped I should cover my legs.  I knew this was part of Islamic modesty, so I was well prepared and apologetic.  It did make me wonder if they’d asked me as soon as they noticed, or only after they’d been annoyed and disgusted by me for too long – I resolved to put on trousers before needing to be asked in future.

One of those dog chases was just an inch from being the end of me.  These dogs lived in wild packs eating road-kill (camel and other dogs).  The pack saw me coming and went into hunting mode.  I had four dogs around the bike and was sprinting flat-out with them going for my ankles, and they so nearly got me.  Thankfully, I could maintain that speed slightly longer than them, and I think one got ran over by a vehicle during the chase, so they probably went back to cannibalise it.

Camel corpses are one of the most disgusting things I have ever smelt.