Diary of the World Record: Day17

Great to ride away from people, buildings, tracks, trees, etc… in to the wilderness of the desert.  Was quite a gradual process.  Herds of free-roaming camels finally confirmed  I was there.

Once in the desert, a new road beside ours was ready but un-opened.  I used it – with approval from police and thumbs up from the truckers.  Great fun.

Nice to have made and early start too.  Late finish.

- May have annoyed my guide somehow…

This was a massive day.  I woke at 4am, and I remember a long slow ride after dark into the town of Sirte.  That distance travelled, and length of effort, were only possible with regular intake of food, and this was the first day after the dysentery I could really eat enough.  Getting and eating the food slowed me down though.

Sirte is where the then long-standing dictator General Gadafi came from.  Not a big place, and I really didn’t get to see much of the town, but it looked very welcome to me when I first saw it’s lights glowing more than a dozen miles away across the desert.  I imagined it was closer, but that was just the dry clear desert air playing tricks on a tired Englishman.

Gadafi’s top cycle escort, my guide Walid, drove behind me with his hazard lights on once it was dark.  The driving standards here are quite crazy.  Generally drivers just floor-it, particularly out in the desert.  There are no speed limits and practically free fuel, so why wouldn’t they?   Gadafi’s Libya was very “petrol-head” culturally, so I was not very safe.  BBC “Top Gear” was a massive TV programme and people genuinely expected me to know the presenters.  Two things occurred to me about this: 1) Top Gear really ought to have visited for one of their challenges. 2) Gadafi ran the country quite like Clarkson would run one.

I asked Walid about the complete lack of road signage in anything but Arabic and he simply said “Do you have Arabic writing on your road signs?”  Maybe it was this long dangerous crawl into town which had Walid on edge, or maybe it was just being in Sirte – whatever, he was preoccupied and anxious when we were finding food and accommodation.  He was less interested and less tolerant of me than before. 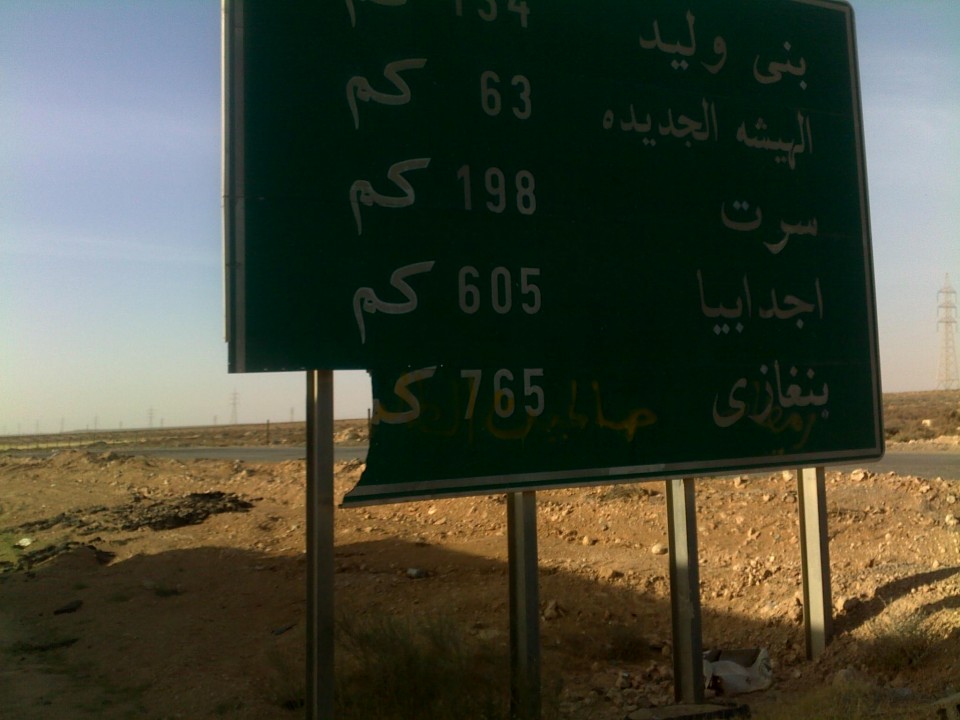