Diary of the World Record: Day10

Quick start due to traffic flowing at my speed, then the wind started.

Nice moment when I stopped for water & to fix tyre: Stranger bought me coffee & cake after I fixed my bike – he was impressed I was riding in the storm.

Only 6mph at one point today!

The sandstorm was insane.  Cycling was brutally hard and extremely dangerous for hours.  Just watch this short clip and you’ll understand:

The hot shower in the hotel was en suite (or more accurately; in the corner of the bed room), but the toilet and sink were shared, dirty, and the loo was just a hole-in-the-ground with a water hose to wash your bum clean. I had to push a bit to be allowed to take the bike to the room, which is odd in such squalor.  The final thing I had to do in the hotel was ask for some clean sheets on the bed; it looked like the last few visitors hadn’t showered before bed.  They did think I was a fussy foreigner for that.  The top blanket on the bed was a beautiful hand-made and patterned wool carpet. 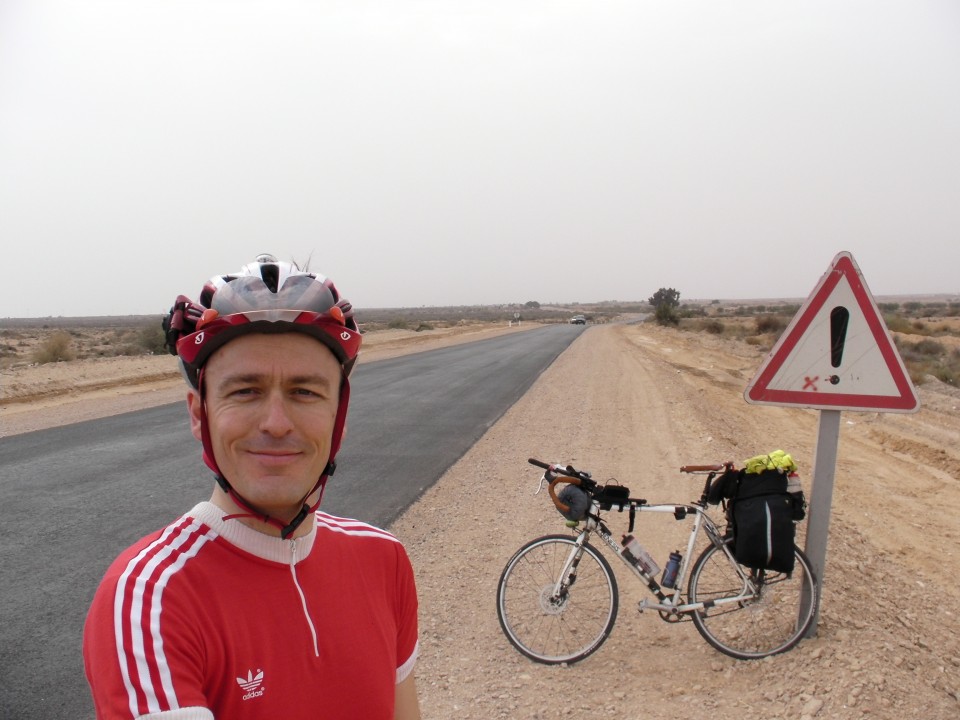 Vin Cox in Tunisia shortly before a sandstorm.

I noticed increasing numbers of “Fuel Stops” at the roadside which almost defy explanation: Basically, there’d be what looked like a homeless person’s cardboard and rag shelter, and a large stack of assorted containers (mainly old drinks bottles).  A hand written sign would alert drivers to the crazy low price of the fuel which I assumed to be stolen (selling for about 20p a litre!).  The guys in this business lived rough, guarded their fuel with their lives, made a pittance, and were in great danger all the time.  I saw one guy filling up a lorry from his pile by hand!